Log is organised in a descending fashion, with newest logs at the top

Topic is locked, please post your questions or comments in Tech Support or Rhino and Grasshopper

2020.1 is a Major release and introduces breaking changes. Grasshopper definitions built with earlier releases of Fologram will not be compatible with 2020.1 or subsequent releases, and contains the following features, changes and updates:

Uses a list of filters (or true false values) to activate and/or deactivate different parts of the document. Useful for creating applications that have multiple ‘modes’.

A counter that increments by one every time it updates.

A simple component that switches between True and False every time it updates. Useful for creating on/off buttons.

Visually see which parts of the definition update when you make a change, or see what’s updating when timers are connected

See through the canvas to save some screen real-estate.

Skip showing the preview in Rhino to optimize performance on devices. Crucial when working with NURBS geometry - when things start to run slow in the viewport. FPS display lets you keep track of the actual time between solver updates. This is useful when you want to understand the performance of definitions that are constantly update (in response to external inputs)

All Fologram components that output a Transform can now be directly converted into basic types,

2018.12.2 - iOS Release
Initial release for Fologram for Mobile running on iOS devices that support ARKit. This includes iPhone 6S and above, iPad Pro, and iPad 2017 and newer.

You can now track QR codes and Aruco markers spatially and in real-time through Grasshopper.

Check out these articles to get started:

You can now select a specific network adapter to use for Fologram. This is useful when running multiple concurrent networks - for example when interfacing with other hardware that requires Ethernet. You can also change the port that Fologram communicates on, which is useful if your organisation has specific restrictions over port ranges.

Grasshopper components that track HoloLens information can now switch between being automatically updated when new data is received and being prompted to update via timer. 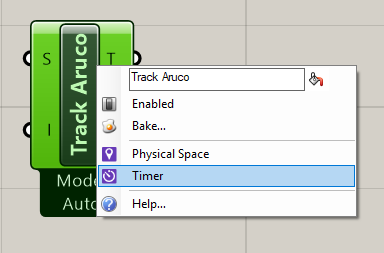 The toggle trigger component can now execute at a delay. Useful if you want to provide feedback to a user when a button is pressed.

Handling of switching Grasshopper documents has been improved.

Text tags now have a more consistent orientation towards the user.

Track Trackers component has been deprecated. Use Track Aruco Cubes instead.

Floating licensing via Fologram accounts, utilizing the new dashboard. Share licenses across multiple devices. See which devices have been used on your account, and when they were last used. Manage payment information and view invoices online. Check out licenses for use offline.

Fixed an issue where anchor synchronizing would fail due to the HoloLens RS4 Update. Compatible client plugins will be prompted to update.

Added ‘Present’ mode, which makes it take longer to open the primary menu. Useful for demonstrations.

Feature: (Grasshopper) 3D Model of the HoloLens is now built-in rather than as a user object

Improvement: (GH Utilities) Mesh Pipe now uses Tolerance rather than number of segments to determine the division amount for curves.

Fix: (Grasshopper) Send Text Tag previews now show in the correct orientations and do not throw errors for nulls

Fix: (Grasshopper) Track Clicks will now force the document to expire, rather than expiring only if it’s ready

Fix: (Grasshopper) Track Clicks will now correctly report Rhino object GUIDs even when All Clicks is turned on.

Fix: (GH Utilities) Mesh Pipe component should not cause errors with null geometry

Menu is now gestural instead of gaze. Use your hand to select select items!
Added ‘Move’ command to drag the model around (renamed the Place with Gaze command to ‘Place’)
A ‘Gesture Coach’ will now provide instructions on how to perform the basic HoloLens gestures for each command
Drag tracking is now always turned on. No need to go into ‘Manipulate’
Image tracking commands are moved in to the ‘track’ section of the menu
Drag to Scale command now accepts both up-down and left-right gestures.

Fix: (Grasshopper) Send meshes components will not cause errors when inputs are null

Fix: (Grasshopper) Track 3D Scan component will now always cause the definition to expire again, even if there is a computation in progress

Feature: Easier initial setup with the Fologram Network Utility, which checks the network configuration when the Fologram command is actioned.
Feature: (Grasshopper) Send Meshes and Send Tags now preview in the Rhino viewport
Improvement: (Grasshopper) Minor clarification/renaming of items
Improvement: Sleep should now be prevented whilst the server is connected

I’m trying to create a on/off button with the new fologram, but cannot find the Flip/Flop component in the new update to create it ?

Welcome to the forum. We’ve superseded the flip flip component because there are much nicer ways to achieve the same thing now. For instance, if you want to create an on/off button you can probably synchronize a boolean toggle.

If on the other hand you want exactly the same functionality as the flip/flop component (e.g. an output changing from true to false whenever the input parameter is changed) you can still build this.

Want to share your definition and a bit more info about what you are trying to build?

Thank you for the quick response, this is exactly what I needed.
I’m using Fologram to build an interactive assembly guide that’s automatically generated from computational timber frame modules, and your right using boolean toggle would be nicer, but I’d like to explore having interactive buttons that pop up when near specific Aruco Markers.

Gotcha. We’re interested in the idea of being able to pin different parameters in physical space (rather than only in the panel / menu) but haven’t implemented the feature yet.