Fologram’s ‘Track Pointers’ component is a great way to translate selection information back into Grasshopper to use as a parameter for an application. See this drawing app example which leverages the location of a device pointer to create drawn geometry at the pointer location.

On HoloLens devices
The track pointers component for any HoloLens device reads the information from the Hand Ray pointers. These pointers are not attached to the device, and float freely in space when sent to grasshopper. The pointers are represented as a vector that begins at the hand location of a user and ends at the collision object detected by the pointers in the HoloLens. The Track Pointers component mimics the rays from a device, so If the ‘Short Rays’ setting is on in the HoloLens, the vectors will be the length of the short rays.

On Mobile
The track pointers component for any mobile device only reads pointer information when the ‘Enable Cursor Interaction’ option is enabled in the app settings, or when the device is pressed or held. This pointer is attached to the device, and follow the direction the device is oriented in space. 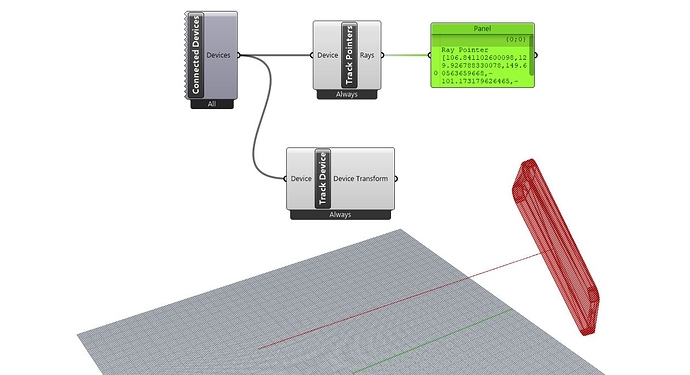 Example File:
This example file tracks the pointers of any device connected to a Fologram session. A Track Device component is used to show the pointer location in relation to the device.
1.14 Track Pointers.gh (4.3 KB)

A Guide to the Fologram Tutorials - What to Try First