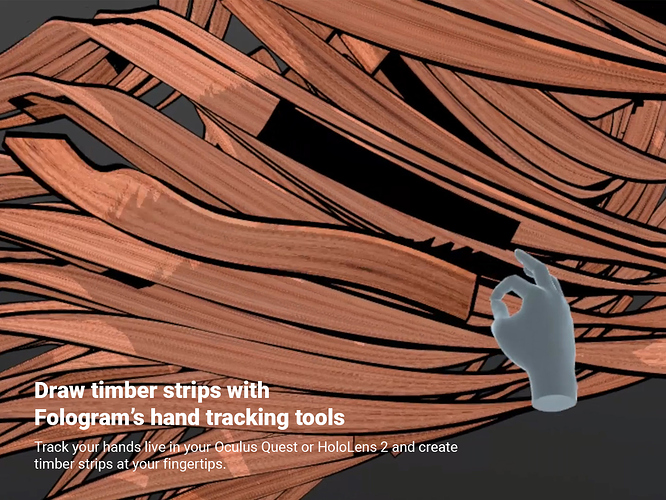 Track your hands live in your Oculus Quest or HoloLens 2 and create timber strips at your fingertips. This example gives you the ability to design and interact with your hands inside a virtual platform.

These timber curves are reminiscent of the Steampunk pavilion - to learn more about this project check out this behind the scenes video. Whilst Steampunk uses an algorithmic field as the core design technique, this example proposes a method that relies on the motion of the body captured in the form of the strips.

This example records the location of the tip of your index finger as you activate a drag motion in Fologram. These points are recorded until the drag motion is released, which converts the points into a curve and creates a twisting lofted surface from a series of tangents along the curve. The lofted surface is given thickness, and a timber texture is applied to the geometry. This example makes use of Folgoram’s global variables, which saves each curve, allowing the user to create a composition consisting of multiple timber strips.

Like this example and want to see more use cases for Fologram with the Oculus Quest or HoloLens 2? Check out our article ‘ This super cool augmented reality tool lets you wear jewellery on your hand’ to learn more.