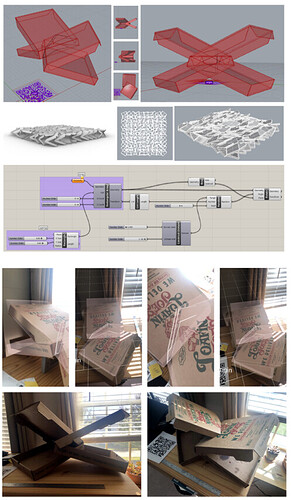 High Tech | Low Tech: Experiments in Spatial Computing for Design and Fabrication was an advanced elective offered in online format in Fall 2020. The class sought both to introduce computational skills and lead students in explorations and discussions around the emerging potential of design and fabrication that incorporate augmented reality (AR). While AR and the free Fologram mobile app that connects to Rhino/Grasshopper were the central focus, the course content was meant to foster critical consideration of design technologies through history. A theme that emerged through the semester was a critique of the architect’s fascination with and reliance on precision and hyper-control in order to create designs and communicate them reliably for construction, as well as the lost potential to elevate skill-based labor and invite serendipity in such controlled processes.

The course revolved around a series of assignments, or “experiments” in the parlance of the class, that successively built confidence in the AR interface while relating to weekly topics—the history of design media, the tool’s imprint on the designed object, labor in design and construction, material tolerances, reclaimed waste and material flows. It also touched on art and social practices, with guests speakers from the art world and local craft community.

Assignments were lighthearted and short-fused—an attempt to add levity and spark curiosity during anunexpectedly isolating and difficult semester. Students learned to anchor digital objects into physical space, control their appearance and orientation, and apply physics simulations. They spatially tracked their devices (and thus themselves) and made spatial recordings of movements. Finally, attaching trackable markers to simple tools, they created AR interfaces that explored how a traditional handcraft or building methods might be reinvigorated or reborn through augmentation. The course posited that AR techniques could democratize advanced fabrication (by greatly reducing cost and lowering bar to use) and reinvent construction labor by putting agency, and thus dignity, back into what are seen now as low-level construction jobs.

Household items and handheld tools were brought into experiments that tended to be simultaneously infuriating, as they pushed tolerances of the phone-based app, and yet invigorating, offering windows into an expanding realm of material culture and design potential. The topic was a perfect fit for a semester when remoteness was required, new technologies for communicating were necessary, and most of us only had access to the simplest and most basic tools and supplies. Digging deeper into home, humanity, culture and craft while embracing advanced technologies built hope for the future of design in uncertain times.