Fologram will stream Rhino’s primative curve types directly to device before rebuilding as polylines for billboard meshing and rendering. To gain insight into the relationship between the number of curves in a model and the expected performance (measured in frames per second) on device, we developed a test that incrementally added arc segments consisting of 3 control points to the Rhino document while recording the corresponding fps. 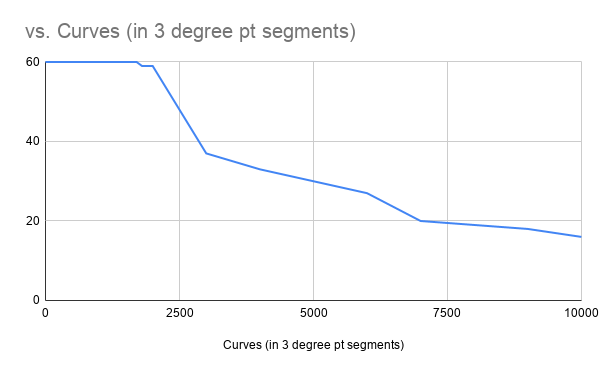 This graph shows that fps drops below 30 at around 4000 arc segments. Each arc segment is being rebuilt as a 12-segment polyline and rendered as a billboard (flat mesh oriented towards the camera), which explains why we come up against performance limits with relatively few curves in the model. You should expect better performance when working with straight line segments (e.g. we should be able to render 4000x12 = 48000 lines) before dropping below 30fps.