We’re often asked how many polygons can be displayed at once on the HoloLens. Microsoft’s guidance to developers has been to expect reduced performance after 100,000 polygons (or 150,000 vertices in the 3D Viewer App), though for many applications it isn’t critical to maintain smooth 60fps performance and so this number can be significantly increased. We created an experiment where meshes were incrementally added to the Rhino document and synchronized with a HoloLens 2 device while logging the frame rate on the headset. The results are below: 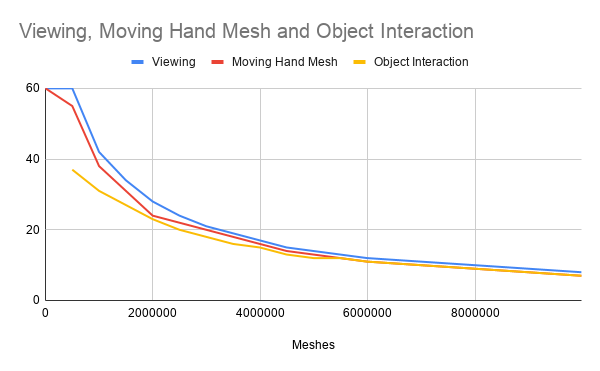 Large, detailed architectural models typically have polygon counts in the tens of millions before any optimization, and attempting to stream these models to device in one hit will inevitably result in long lags or crashes. However, adding objects to the scene incrementally allows us to directly observe the relationship between performance (measured in fps) and polygon count. We experienced fps dropping below 30fps at ~2 million triangles, acceptable for models without animations or a lot of interaction. Although we were able to continue adding meshes to the scene up until crashing at a bit over 20m triangles, the reduced fps made these experiences uncomfortable.

A note on the test: All objects are in the field of view of the device during the test. Interactivity is enabled (hit boxes and ray casting). Hand meshes are on. Objects were added incrementally to the Rhino document after any existing objects had synchronized on device.