How accurate is the Hololens

We’re often asked whether you can directly build from holographic templates, and how accurate these holograms are over building scales. This is a notoriously difficult question to answer because the accuracy of the HoloLens SLAM algorithm is affected by the lighting, contrast, features, reflectivity and motion within the work environment. This is further compounded by the perceived drift of holograms that result when the device is not properly calibrated for a wearers eyes and cannot render the depth of holograms correctly.

Note: The following experiment was conducted with a Hololens 1 device

We conducted an experiment within a large open space with flat lighting, no moving objects and few features and measured the drift of holograms within this environment. We placed two aruco markers at known locations, precisely 12500mm apart from one another in a straight line. The position of these markers was then measured using Fologram’s computer vision tools running on the HoloLens. Any variation between the tracked distance the the measured distance is caused by drift. HoloLens tracking accuracy tends to improve as the device registers more feature points from simply looking around the space over time, so we repeated our experiment several times to measure drift under different tracking scenarios. 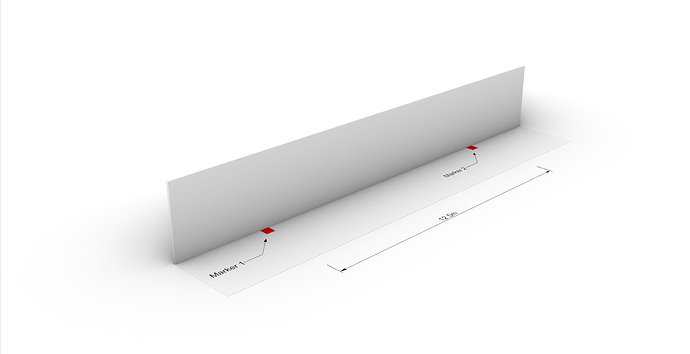 In our experiment, we observed the following error (drift) between measured and tracked positions.

By placing markers at known and measured set out points on the construction site, holographic drift can be corrected by creating a vector between tracked and known marker positions and using this as an offset to the rendered positions of holograms. This facilitates the accurate construction from holographic templates over larger distances than 12500mm.