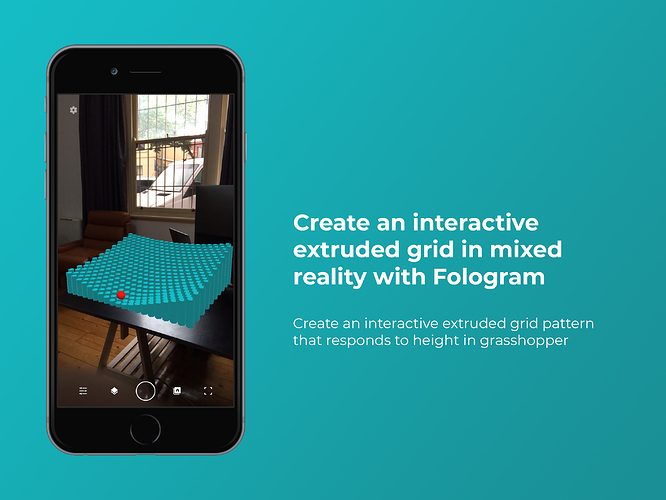 Learn how to create an interactive extruded grid pattern in mixed reality with Fologram2848×2136 1.31 MB

Create an interactive extruded grid pattern that responds to height in grasshopper. This simple example is perfect for beginner grasshopper users wanting to learn the basics of Fologram, and can be used as a template to experiment with interactive attractors in mixed reality to affect geometry, materials, scale, rotation and more. 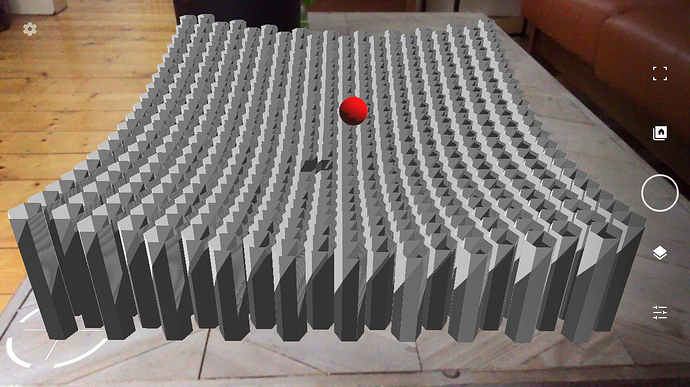 Attractor poitns can be itneractivel moved in AR with Fologram.PNG1334×750 369 KB

This example creates a parametric relationship between the height of the grid extrusion and an interactive sphere as it is moved in mixed reality. Cell sizes and quantity of the grid are synchronised to give you full control in Fologram.

Like this example? Try using the sphere position to control other parameters in the definition or with different patterns, apply the pattern to a facade, or check out our article ‘Did you know you can make a fading grid pattern with basic materials in Fologram?’ example to learn more!

Thank you for the great examples. I have used fologram for mobile before, and I am using it again now with my students in a design studio. I encountered problems with dragging such a „moveable“ sphere on the smartphone screen. It used to work sometimes - but simetimes the same file did not work. Do you have any suggestions how that could be fixed? Is that maybe an issue of scale? Thank you!

Hi @Renate can you send through the exact grasshopper definition you’re using and I will take a look?

Most likely if the dragging isn’t working it would be because either the sphere is too small and Fologram is detecting the tap on something else, or the parametric model is too slow and the interaction is taking a while to buffer before any changes are visible in AR.

Hi @Gwyll! Thanks for the response! I was able to fix the problem. I am using Fologram for mobile with my architecture students in Frankfurt for outside simulation of a new campus building. We have encountered some problems when using Fologram with Smartphones in exterior space. Despite many trials, the positioning with the QR origin as well as the scaling did not work out. The students really put a lot of effort. In interior space everything works quite well! I suppose Fologram for mobile is not really suitable for exterior use? Do you have any idea of what might cause the problems and how we could fix them? Is it a problem of exterior light conditions? Or a problem of big scale of buildings? Thanks a lot in advance!

Can you let me know a bit more about the specific issues the students were having with QR placement and scale?

If students were experiencing drift (movement of the hologram relative to the physical environment) then this is likely due to:

You might be able to overcome these issues slightly by placing the model with multiple QR codes (e.g. you might place them every 10m or so in a straight line, then snap the model to the nearest QR code as you walk around), though I would still anticipate a lot of drift.

However if they were running into other issues (such as alignment of virtual and physical objects) let me know and I can try to work out what went wrong.