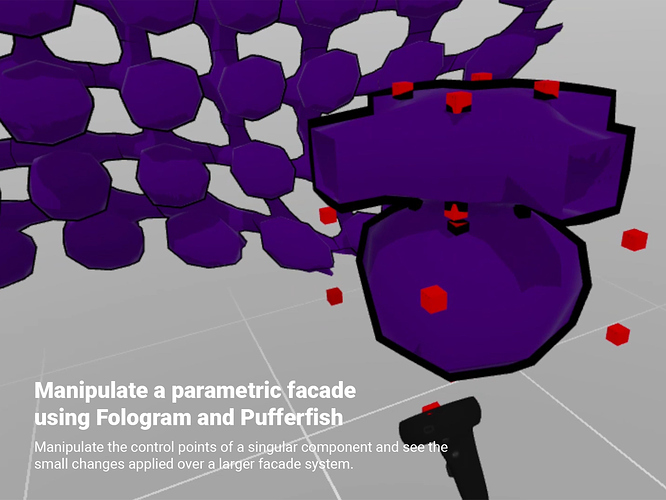 Manipulate the control points of a singular component and see the small changes applied over a larger facade system. This is a great example of how you can use Fologram’s object manipulation tools to control a larger piece of geometry, and is perfect for intermediate users of Grasshopper who are beginning to explore Fologram’s toolkit.

Often when we create options in Grasshopper, we do so through slider and data changes, however It is difficult to gain freeform control over our modelling tools. This example utilizes the strengths of object manipulation in AR/VR, and allows you to freely move the control points of an object in 3D space to quickly update an overall form, without the need for clunky sliders and gumballs.

This example uses the Pufferfish plugin by Mike Pryor to freely array a base component over a freeform surface. This component can be edited in real time by exposing its control points as boxes that can easily be edited by an user in a Fologram AR/VR device. The component is then smoothed using the weaverbird plugin.

Like this example and want to see more great ways to use Fologram’s for freeform modelling in 3D space? Check out our article ‘ Create and customize your own parametric tower model in an urban context with augmented reality’ to learn more.