Hi There,
I am using fologram on Iphone 12 Pro Max/Ipad Pro and I am trying to position a model in space using the QRs. When I “snap to QR”, the app detects the QR and snaps to it. However, it always places the virtual QR incorrectly (see “A-3” in the image attached, which should be placed on top of the QR on the right). This happens consistently on all models I’ve been trying. So far, I have unsuccessfully tried:

-Using different devices (other iphones, ipads, etc)
-Using Aruco markers to better define the space around
-Different lighting conditions and different surfaces.
-The use of two QR markers without any rotation set, just the position, in order to be able to triangulate/interpolate from them.
-Turned on “track aruco markers” and “track QR codes” in the app settings.
-Re-downloaded fologram from the App store (v. 2020.3.21)

Any Idea of what I might be doing wrong or of any known issue?
Any hep would be greatly appreciated! 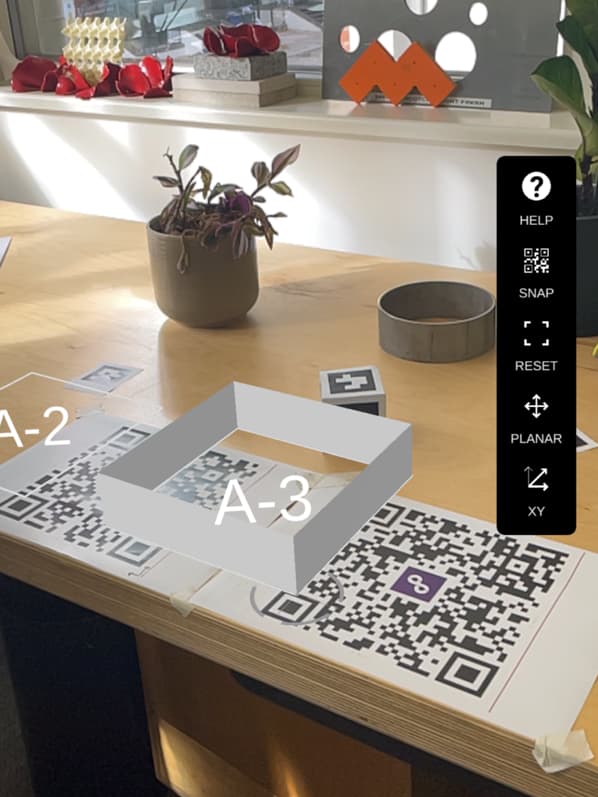 Can you please send me a PDF of the two codes you are using? There are known issues with creating codes with negative x and y axes, so it might be worth using this one which is just at 0,0,0 with +ve x and y axes and seeing if it works:

If you have the same issues with that code then there are also known issues with newer phones and tablets detecting codes so efficiently that they scan while holding the phone at an oblique angle (for instance as pictured in your screen grab) and this leads to inaccuracy.

If you are experiencing inconsistent placement then I would try holding your phone directly above the code so it fills the whole FOV and then pressing the snap button to ensure that you aren’t accidentally scanning it on an angle. This can still lead to inconsistent results so try it a few times.

Thanks @Gwyll , here are the QRs I used. They should both have positive X-Y (and Z, and I definitely previously printed ones with negative Z as the print was basically a mirror of the QR on the screen), but perhaps I’m wrong.

Anyway, I tried the one you gave me, and making sure I snap only when I’m perfectly above the QR makes it work well now (pressing ‘snap’ two or three times before it places and orients in the correct way).

Thanks a lot for your help!

It looks like for code A2 it will be placing your origin at -3,277,0 so where this is located in your screen grab actually looks about right. The origin will only snap to the corner of the code if it is placed at 0,0,0 (like mine). Somehow that code also has an unset rotation value which is likely to cause problems as well.

The A3 code is located at 166,-31,0 with a 90 degree rotation around the Z axis so this would be locating the model in a somewhat arbitrary position as well.

Best practice is to simply use a 0,0,0 code with 0,0,0 rotation and then locate your Rhino model relative to the Rhino origin so that it appears in the correct physical location.

Hi @Gwyll,
Yes, agreed, been using a 0,0,0 code and haven’t had any further issue since.
Thanks again for your help!