I am currently working on a curved brick wall, similar to the project that has been presented as a showcase of the fologram technology. I am wondering if there is any difference in using a goggle that is not HoloLens 1 or 2, for example, a Oculus Quest 2? I understand that we are able to connect the latter, but am unsure if there is any feature that may only be available for the former, as this page (https://fologram.com/pricing) suggested that the package is for Hololens (only?).

Basically, I am interested in the capability of the image below and am wondering if that’s doable with Oculus; anyhow, just starting out and any advice that is even remotely related would be very helpful and appreciated: 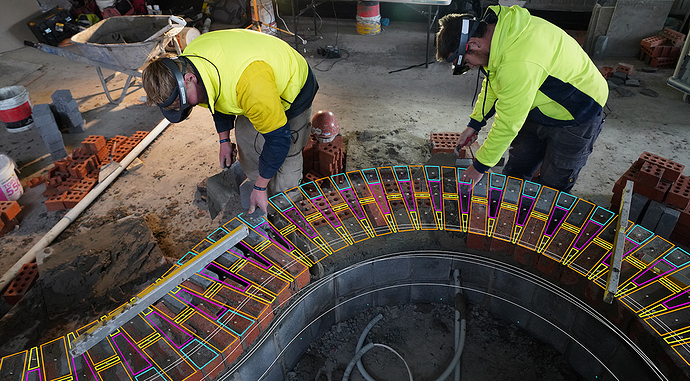 Great to hear your interested in using Fologram for some bricklaying. Do you have any drawings of the design that you would be willing to share? How large is the project? Is it interior or exterior? Are you working with multiple brick types? I’m curious to see what you’re up to and would be happy to share what we’ve learned about optimizing designs and shop drawings for holographic fabrication.

In terms of headsets, you will need to use the HoloLens for the project. This is because the HoloLens has a see-through display that allows whoever is building the wall to see their physical environment as well as any holographic information at the same time. The HoloLens also very good at keeping holograms fixed at a specified location in physical space which is essential if you’re planning on using holograms as templates to build from.

We’ve delayed releasing Fologram for Quest for the foreseeable future while we concentrate on supporting fabrication and construction applications for the HoloLens 2.

Thanks so much for you thoughtful and insightful response. It will certainly be super amazing to get you and the developing team’s personal expertise as the project develops!! We plan to finalize design and begin testing/construction in the coming weeks, with the hope of completion within 3 to 4 months.

I will share a in-progress rhino model shortly via private message. But in short, it’s an exterior free-standing (not part of a building) brick wall that measures about 22m in length and will be broken up into 4 individual segments that together forms a wall but are not physically connected necessarily. It is unlikely that there will be more than 2 brick types, the varying forms are mainly achieved through the curvature of the base surfaces and the rotations of the individual bricks. It is possible that we will only apply the AR workflow to one of the four segments, and the other three completed with a robotic arm.

Regarding the AR application options, due to the high price of HoloLens2, for now it seems unlikely that we will purchase one ourselves, but are looking for ways to perhaps lend one or seek for other ways of being supported…I was testing out the iOS app of Fologram and wonder if that may be an alternative in your opinion. Obviously it will not be as ideal as the headset, but may be cool that multiple people may all have their phones out and participate!? What would be some major limits (or functionality that you deem to be required for the workflow yet unavailable on the app) compared to the headset? For instance, would it be a lot less precise or present intolerable amount of deviations? I am quite comfortable with grasshopper and after going through some parts of your DigitalFutures workshops was hopeful that maybe using the phone might be an alternative.

Is there a way to send you the rhino file @Gwyll? I couldn’t seem to find the messaging option on here similar to the function on the McNeel forum, thanks again!

Hey Tim, I sent your a DM with some instructions, hopefully you got it.