Many of the low hanging fruit for mixed reality fabrication require wide-tolerance approaches to design. This is because working by hand and by eye typically affords a lot of intuitive decision making but doesn’t suddenly imbue the fabricator with laser precision and dexterity. The advantage of working with mixed reality is a reduced risk of these intuitive decisions and imprecise workmanship leading to accumulative errors during fabrication, thereby enabling fabricators to work far more quickly, in parallel and with reduced expertise. However these advantages come at the cost of approximate representations of digital design models to within tolerances that are often the result of explicit tradeoffs between fabrication time and precision.

Designers should think about precision as a spectrum from precise-slow to approximate-fast rather than the all-or-nothing precision (parts either fit or they don’t) of many CADCAM processes. This requires working with design systems that can capture design intent without needing to be explicit. Conventional CAD software is all about explicitly representing forms with points, lines, curves, meshes and surfaces. These geometries can still be used to document wide-tolerance design systems so long as designers can also articulate to a fabricator what may be deemed acceptable precision. This typically requires frequent communication or inspection. In designer-builder scenarios this is not a problem, but for describing designs to third party contractors new documentation tools are required. It is worth considering a range of design systems that are well suited to generating and documenting wide tolerance designs. 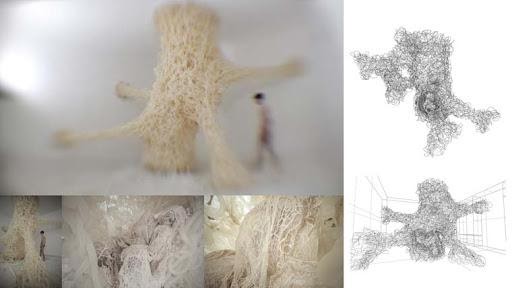 The idea of fuzzy modelling can be taken literally (fuzzy buildings) or in the abstract to mean defining design intention as a probability space representing the ideal position of material as well as acceptable deviations. Designers might represent probability spaces as density of overlapping curves or linework, as distributions of colour or geometry, as signed distance fields or any other method. Fuzzy Modelling essentially assumes fabrication error a priori and uses expected deviations and mistakes to drive intended design effects.

Describing design intentions as probability spaces rather than explicit surfaces enables a consideration of likely architectural effects that derive from stochastic material distribution and negotiation with unruly material behaviours (stretching, sagging, slumping, breaking, inflating, tearing etc) during the design process. Because a hand-crafted mixed reality fabrication process will introduce these behaviours and effects naturally if working with appropriate materials, the result is a physical artifact that meets preconceived design intent. 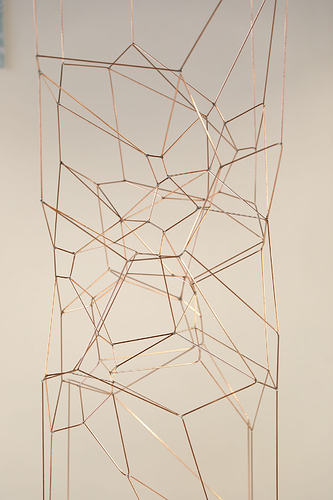 Non-uniform networks describe arrangements of nodes and edges with minimal exact repetition. The requirement for these networks to be non-uniform is derived from the need to conceal small mistakes introduced through precision-time trade offs within many deliberate differences in the design.

Network structures are generally well suited to mixed reality fabrication even if they are repetitive, though these counter-intuitively require longer to build due to the need to ensure enough precision to avoid errors being obvious. This means it may be worth deliberately introducing difference into forms that are created with conventional CAD modelling tools (copy, array, mirror etc). Parametric modelling tools tend to be well suited to this task. 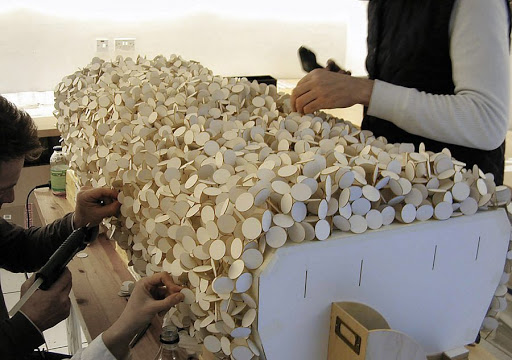 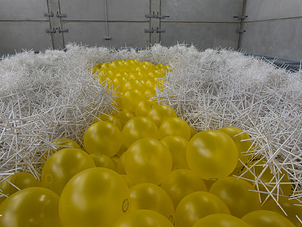 Aggregate designs consist of large numbers of standardised parts with unique joint conditions. These designs are typically extremely difficult to document and as a result are usually rationalized into standardised parts with equally standardised joints, or produced through either ad-hoc craft based assembly or physical deposition. The appeal of digitally modelling aggregate designs is the ability to perform rapid design iteration as well as engineer the resulting proposals. Depending on engineering requirements, designs may be physically simulated in order to guarantee connections between parts, or they could be only very approximately modelled with gaps between parts that can still be accommodated by joint tolerances during fabrication. Aggregate designs make small scale precision redundant through joint tolerances and degrees of freedom in connections.

Benefits: Entire designs can be described with just a few attractor points. Well suited to distributing precision between exact and approximate tolerances.

Considerations: Doesn’t provide a system for creating joints between parts

Designing with vector fields provides a means to make trade offs between explicitly defined conditions and interpolations between them. An ‘attractor’ in the field may determine the exact geometry and orientation of nearby parts so as to connect to existing conditions, or enable prefabrication, while allowing nearby parts to vary in shape and orientation in order to be more tolerant of fabrication errors. The degree to which a part matches the explicitly defined properties of the attractor therefore lies on a spectrum, and ‘attractors’ can be used in a similar way to document where precision is required to fabricators. Vector fields explicitly describe where precision is required, and allow error to be hidden in gaps between parts in the field. 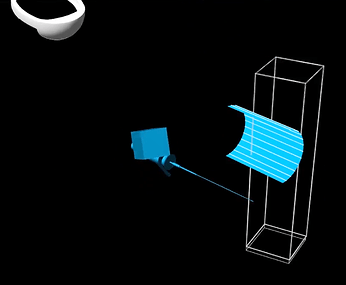 Analogous modelling means utilizing design modelling tools that produce the same digital forms as tasks performed by the fabricator. A good example of this is modelling designs that are going to be created with a hand held hot wire tool by iteratively booleaning the sweeping geometries that make up each individual cut that a fabricator will make from stock material. The advantage of analogous modelling is that these modelling steps are also used to explicitly describe fabrication tasks in mixed reality, improving task communication and thereby reducing error.

This design approach works extremely well for mixed reality fabrication, but requires an acute understanding of fabrication techniques and processes and some iteration between design modelling and physical experimentation. It also limits the tools that are at a designers disposal as many modelling tools do not have 1:1 physical analogues (e.g. many of the clay sculpting tools in zbrush are not actually possible in reality).

Physical simulations for design are most useful if the physical properties of the material are expected to have a significant impact on the resulting formed shapes e.g. elastic bending, inflating, weaving, wrapping, stretching etc.